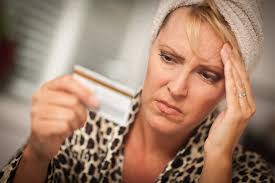 You see the headlines all the time. Banks repossessing homes, people jobless. Australia as a nation is struggling with credit card debt and how to pay it off. It’s been a big fight and one worth having. Truth is, we all handle debt a little differently. Some people are comfortable with owing, others aren’t.

It’s not always about politics, but circumstance and tolerance. Some people are opposed to owing because they have a stand to make, others because debt makes them cringe. It’s easy to take refuge in the headlines because they are usually about a world apart—those other people who are in trouble. But it’s harder to understand what it’s like to be under the crush of owing. It’s also easy to write debtors off as spendthrifts, irresponsible, unreliable.

Chances are good that you know someone who has, is or will struggle with credit card debt. And you might not even know it. I can speak from experience when I say that credit card debt can make a person retreat into a shell. My wife and I once struggled making ends meet. We were young, not making a whole lot of money and trying to do right by our first-born child. We were in over our heads, and it was hard enough to admit it to each other, let alone to other people. We put up a front, avoided questions, hid the fact that we were in deep.

It wasn’t about pride; it was about shame. Personally, I felt like a failure. Even after we signed up with a non-profit debt-management company, there was a weight on my shoulders. I would wake up in the middle of the night, short of breath and sweating and spend the rest of the night watching TV and wondering what had gone wrong with my life. I was distant and aggravated. I felt constantly on the edge of tears or shouts. Even the moments that should have been the most joyous—the birth of my children, holidays — were tinged by the constant fear that the phone would ring or that we wouldn’t have enough money for food and gas.

I began having panic attacks, these blinding flashes of pain in my chest, a clenching of every muscle and straining of every nerve. I would hyperventilate and have an overwhelming need to just go. Anywhere would do. Anywhere but where I was. There were nights when I roamed the aisles of our grocery store, no money to buy anything, just to keep busy. I would go through periods of manic optimism and crushing pessimism. I wasn’t leading my household, I was burying it. And true, I was doing all the right things to make things right, but it never felt like enough. I wanted to wipe the slate clean.

There were times when it felt like paying things off was the wrong thing to do. I once spoke with a mortgage broker who recommended we declare bankruptcy rather than continue paying off our debt. I couldn’t understand it. I wondered how it could possibly be better to run than to stand up and do the right thing. My wife, too, was on edge. She was nervous and angry all of the time. Our relationship suffered for it. It almost ruined us. Had we been smarter or more willing to open up, we might have realized we were experiencing almost textbook symptoms of depression. And that we weren’t alone.

According to research carried out by Boston University, which found that for every 10 percent increase in the dollar amount of a person’s debt, his or her depressive symptoms increase by 14 percent. Severe debt has been shown to lead to bouts of depression and even suicide. My wife and I weren’t spendthrifts. We weren’t going on lavish vacations or buying exotic things. We were walking the slippery slope between what we needed and what we could afford. And, sadly, once you go over the edge—even just a step—it’s hard to get back. It took us two years to get into trouble and more than five to get out. And the worst part is that our case was not nearly as severe as is could have been.

There are thousands of families worse off than we ever were. Things have been better for a long time now, but there are nights when I still wake up scared someone is going to call looking for a payment. It seems the effects of debt linger well after the bills are paid and your credit score has improved.

You and Your Money’s top tips for paying off your credit card debt:

There are all manner of resources out there for those struggling with credit card debt and depression. If you or someone you know is struggling, it’s important to reach out and get the help you or they need.

The most important thing you can do when confronting severe debt is ask for help. Not handouts; seek help to manage both your bills and mental and emotional health.

Trust me, you’ll be glad you did.

you are spot on with this post
I think credit card debt causes incredible worry and stress. It can have a terrible impact on peoples health and relationships