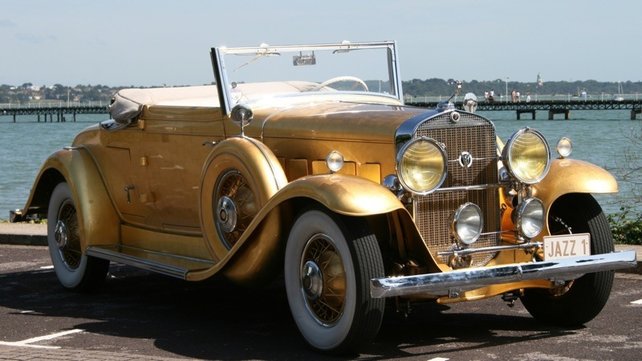 Worried you’re not making enough of an impression in the office car park? This could be the car for you. It’s a gold 1931 Cadillac Golfer’s Drop Head Coupe and when we say gold we aren’t talking gold paint.

The lead car in Barons’ sale at Sandown Park on September 17th is guaranteed to turn heads. In fact, it could probably stop traffic! 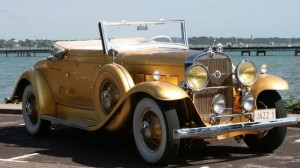 The 1931 Cadillac Golfer’s Drop Head Coupé – which is believed to have once belonged to the flamboyant pianist Liberace – features 23.75ct gold leaf-clad bodywork, silver external door handles and 24ct gold-plated internal door handles. These gleaming embellishments are the results of a lavish, three-year project carried out in the 1970s by the then-owner, Jack Smith of Kansas, USA.

Mr Smith sold the car at a Kruse auction in 1975, and in more recent years it has spent 12 years on display in a German museum – where it was presented as Liberace’s car.

The gold leaf coachwork is offset by white leather upholstery and a working hood completes this truly extraordinary vehicle, which also has driving lamps that move with the steering wheel.

The car is powered by a 5.7 litre, V8, mated to a three-speed manual transmission. The guide price for this very rare Cadillac is £85,000.

Like its  former owner, the Cadillac is something of a hard act to follow, but Barons has a diverse array of cars on offer at Sandown Park, with everything from starter classics to highly desirable lots for established collectors.

Just to be clear though, this is not a car for the shy and retiring type.