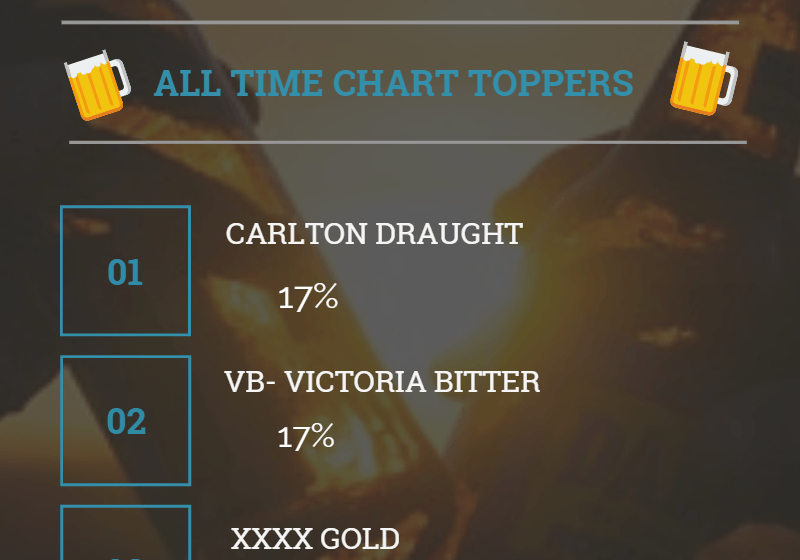 Ever since Captain Cook set sail from England in 1768 with four tons of beer aboard the HMS Endeavour, the amber fluid was destined to become part of Australia’s colonial and post-colonial heritage. With Australia Day almost upon us, Roy Morgan reveals the 10 most popular home-grown beer brands and takes a light-hearted look at the people who drink them.

More than three-quarters (76%) of Australia’s beer drinkers are men.

Flying the flag and drinking the brew

Certainly, choosing to drink an Australian beer can be seen as a ‘true blue’ gesture in itself — but are there degrees of patriotism between these popular brands? Too right, cobber!

According to the most recent findings from Roy Morgan Research, Australia’s most fervently patriotic beer drinkers are folks who drink XXXX Gold, Cascade Premium Light, VB and Crown Lager.

These people are more likely than other beer drinkers to believe that ‘Australian beer is the only beer worth drinking’ and that ‘imported beer is a waste of money’. XXXX Gold and VB drinkers are particularly vehement in this respect.

They also tend to be more likely than drinkers of other Aussie beer brands to ‘try to buy Australian-made products as often as possible’ — not just beer.

Whereas 80% of Aussie beer drinkers agree with the statement ‘I consider myself Australian’, 94% of Cascade Premium Light drinkers, 90% of Crown Lager drinkers and 88% of XXXX Gold drinkers feel the same way.

Bearing all of the above in mind, perhaps it’s not surprising that drinkers of these four iconic Australian brands are significantly more likely than your average beer drinker to be aged 50 and older. In time-honoured Aussie tradition, they can often be found hanging out at the RSL or Leagues Club, where they may well be playing the pokies.

“Many of us will be cracking open a cold one on Australia Day, but some will be doing it with particularly ‘true blue’ passion. It would have been surprising if Cascade drinkers weren’t among them, since Cascade is Australia’s oldest operating brewery — cause for a bit of patriotic pride in itself!

“Funnily enough, drinkers of Cascade Premium Light are more likely to be from Victoria than from Tasmania (where the brewery is based): of the top-selling Australian beers featured in this release, James Boag (also from the Apple Isle) is far more popular among Tasmanians.

“Not surprisingly, XXXX Gold drinkers overwhelmingly tend to be from Queensland, while VB and Crown Lager are most popular in Victoria.

“Of course, there is infinitely more to beer drinkers than their patriotic tendencies. For example, our data reveals that people who drink James Squire are much more likely than the average beer drinker to have read a novel in the last three months and self-identify as ‘a bit of an intellectual’, as well as being avid gig-goers and possibly even musicians themselves…”